I head up all the creative work at ES. This includes user experience (UX), user interface (UI) design, flow, branding, prototyping and anything else design related.

I graduated from the University of Pretoria, specialising in BIS Multimedia. My very first job was a multimedia designer at a company now known as IMImobile. While I was working at IMI, myself and two friends started building our own platform called Trevolta, which was basically a Kick-starter for travellers. Using clever onboarding mechanisms and $5 towards Facebook marketing, we managed to sign-up about half a million users in just a week. So, of course, we quit our jobs, registered a company, raised a seed round and started working for ourselves. We enabled many travellers from all around the world to reach new horizons. However, after two years I was introduced to the feeling of closing a company.

After Trevolta I joined an fledgling start-up called Hellocrowd, and spent about a year-and-a-half designing and building eventing apps. Following Hellocrowd I began working on ad-hoc freelance projects, and during this time myself and two friends opened our first coffee shop. We learned everything about coffee and loved every second of it. All of a sudden we were baristas! 🙂
I created brands for two different coffee shops – one of which I owned but later had to close. My journey as an entrepreneur has taught me to love the quote: “Take risks! If you succeed you’ll be happy, if you fail you’ll be wiser.”
It was during my coffee season that I started working at Empire State, my new family 🙂

I love the fact that our company is built on a foundation of trust, love and passion. Empire State is a family of hard-working individuals who share a passion for tech and coffee – and we won’t stop until the world is a better place for everyone.

The fact that I get to “create” and contribute to amazing and meaningful projects gets me out of bed in the morning. There’s nothing more exciting than launching something you’ve been working on for months! We are a very tight-knit family and I literally wake up every morning knowing that I’m going to hear either an interesting story or a great idea from someone in the team.

By designing the change we want to see in the world, I believe we can leave the planet a little better than we found it! In my opinion, media and tech has the biggest influence on people all around us. If I am able to build or design something that would help them in any way, I would be thrilled.

My husband and I share a passion for adventure, travel and music. We’re part of a group that embarks on an annual challenging hiking trail. We also love mountain biking and camping in the most deserted places we can find. I love playing drums and jumping out of airplanes every chance I get. 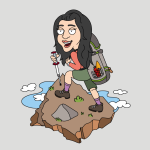 Give Lorette a High Five!