My journey to this point has been an interesting one. I’m completely self-taught, so it all began with a massive explosion – and the mass collection and fusion of hydrogen atoms in gravity swells producing helium atoms as a byproduct and the very stars you see today … but to cut a long story short:

I had humble beginnings at an internship at my previous company, and after that massive mountain I took up a contract in Durban working on an agricultural web/mobile app which was/is really cool. It helps a lot of small farmers get into the market and supplies/collects data from different farms and their farming techniques.
But contracts, as with all things in life, come to an end and I found myself with a bigger and better offer from the place where I originally started my internship. I came full circle and the rest, as they say, is history!

I like Empire State because it is “user-friendly”. All the people I have met and have had the opportunity to work with are really down-to-earth, fun and caring. I really like the social interactions on WhatsApp, and the weekly emails of conquests. It’s an awesome atmosphere of like-minded humans – the kind of thing that’s better experienced than described!

I’m thankful that I get to do something that I’m passionate about, that challenges me, and that keeps me focused on what I’ve worked so hard on in my coding career. When it comes down to waking up and starting my day, that’s a win for me!

Outside of ES there are a range of horrors! I’m a “live in” and 65% of my time is spent on study and research into existing and new technologies in the software arena, 5% is spent yodelling, 10% is spent cooking, and the remaining 20% revolves around sleep and spending time with family! A fun fact about me is that I’m left handed – and left footed.

If there is eventually an AI running the show, I’d definitely like to be one of the people who can say “I helped build that” and “we live in a utopian society, you’re welcome”!

But realistically working on any product that uplifts people’s lives in some way would bring me the ultimate sense of happiness and achievement. 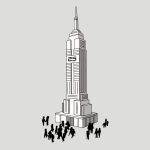 Give Empire State a High Five!