I’m responsible for quality control at Empire State. As the QA Lead, I make sure every i has a dot and every t a cross. My responsibilities include unit testing (testing specific pieces of functionality), integration testing (testing the piece of software as a whole) and usability testing (testing across multiple devices and viewports).

I started out, can you believe, as a sub-editor for an IT publication. I made my way up to content editor, and later became the editor of a trade magazine. I saw the need for my skills in the development space because of the way apps are created. Too often, fonts do not match. Words are misspelled. Buttons are in the wrong place. Apps crash when you follow certain steps and views break on different devices. As a self-confessed “grammar Nazi” and perfectionist, this drives me totally nuts.

Empire State is a place where I am encouraged to explore whatever interests me, whether or not it will directly benefit the company. This open attitude, my fantastic, talented and funny co-workers and my work-from-home perks make me very happy.

What gets me out of bed in the morning is coffee. That, and the fact that I am literally paid money to complain and point out faults. My fellow Empire Statesmen really enjoy this aspect of my personality. 😂

Aside from the work I do at Empire State, I created an app called Lost & Hound to help reunite people with their lost pets. We are picking up speed in South Africa, as well as in places as far flung as Argentina, Tunisia and California!

When I first started working, my editor told me that subbing is like housekeeping: everyone notices a dirty house, but when cleaning is done correctly it doesn’t draw attention. I believe that the little things matter. The details are important and they make for better products that are more useful to the humans who will actually use them. I love to use my skills to give people the most seamless experience possible of the products we create.

Aside from being Paid to Complain™️, I am an old soul who enjoys cooking, gardening and finding an antique at a bargain price. All while listening to Swedish melodic death metal! Rock on! 🤘 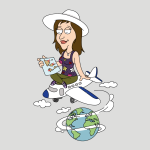 Give Leigh a High Five!